Tapping Into The Mind-Body Connection

TAPPING INTO THE MIND-BODY CONNECTION

Some people might consider growing up in the rural hill county of southern Illinois a detriment. Port Angeles resident Vickie Dodd considers it a blessing. Hill folk are not very sophisticated, Vickie says, but they’re the “salt of the earth.” There’s a certain wisdom, a mysticism if you will, that revolves around the simple life of the people of southern Illinois where Vickie was born.

What might be considered uncommon by people of other regions is common to the hill people. Because of that, when Vickie discovered at a young age that she had an ability to perceive frequencies in everything from trees and flowers to people, she wasn’t considered unusual.

“I’m grateful I came from humble beginnings, because if I told my mother I had a vision, it was not a big deal to her,” Vickie says. “I‘m grateful those gifts were considered common.” 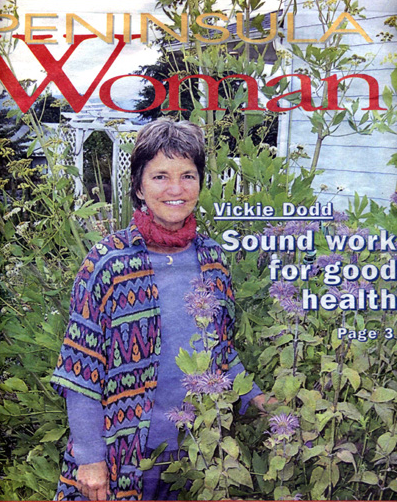 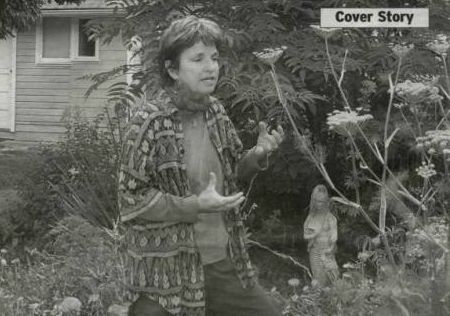 Vickie Dodd of Port Angeles uses a “sound and frequencies” technique in helping people with the healing process, calling it her purpose in life and a way to be of service to others.

She’s grateful because she says many people come into the world with special gifts and abilities — and are then “educated” or “medicated” away from those abilities.

She worked with some of the most advanced thinkers of that period which helped her “get embodied” herself. It was an incredible time for herself and others throughout the world, Vickie says. “We were wanting to wake up a more direct connection with a higher power, something greater than ourselves,” Vickie says.

That awakening period, Vickie says, really wasn’t “big business” back then. “We were just really serious seekers,” Vickie explains, noting that that direction saved her life because, having no personal boundaries, created physical and emotional “dis-ease” within her. Being involved in the body-mind awareness movement gave her a purpose in her life, a way to be of service to others. “It helped me become healthy,” she says. While she was learning to help others, she was working on herself. That, she says, is a lifelong process. One cannot go through the training without doing the work for themselves. She began working with Judith Aston and has been an Aston-Patterning teacher since 1973.

Those gifts, however, are a part of a person’s being and are reliable and useful. They are common sense. “My whole work has been about trying to demystify common sense, so it takes away that separation,” Vickie says.

Vickie Dodd practices a technique called “sounding” and says it has both physical and emotional effects on people.

Vickie’s gift first became noticeable when she was about 3 years old. She began by tapping out people’s emotional body rhythms. Rather than be put off by her child’s unusual sensitivities, Vickie’s mother got her dance lessons. Vickie’s dance instructor often toured mental institutions to cheer the patients, and Vickie would go along, tapping out patients body rhythms. It had a calming, soothing effect.

Raised in the 1940s and ’50s, Vickie was a student of people. Information came to her through many paths others either learn to block out when they are young or are not developed fully to begin with. In a rural setting, Vickie could handle the information streamline.

But, in the ’50s with the nation facing economic difficulties, many rural families headed for the city. Vickie’s family moved to Chicago. The city was alive with all kinds of frequencies and vibrations for the sensitive teen — and Vickie loved it. But, she had never established boundaries within her-self.

She was like a raw nerve exposed to stimulation most people automatically filter out. She had never doubted the existence of a being greater than herself, so she knew the information was not her responsibility to process. However, she had to be taught how emotions lives in the physical body and how to process them to pass in and out of herself without letting them harm her.

Aston-Patterning is the application of the Aston Paradigm to bodywork and ergonomics, matching human function to its environment. She has studied and become certified in massage therapy, iridology, nutrition and colon cleansing. Throughout her training, she continued her work with sound and frequencies, and began using sound with massage and Aston-Patterning. But, she says, she was tentative to use her voice.

When she began studies with Elias DeMohan in Houston, Texas, and the Esoteric School for Color, Sound and Vibration, in 1972, she began receiving affirmation for her voice work. That work helped Vickie grow comfortable with using her voice and provided her the assurance she needed to continue developing her process of “sounding” people to help them overcome emotional and physical pain.

She began sounding her friends. Excitement grew. She saw the change in her clients alignment when she added sound therapy to massage. “Sound will touch places that hands cannot reach,” Vickie explains. “It helps mature the emotional body, especially old, old memories.”

The body is a recording device of a person’s individual history. The body records and stores all of a person’s experiences. These stay in the molecular system of the body as undigested material. People have a tendency to bury those recordings, especially painful ones, but the body wants to be heard.

In the early 1980s, psychologists began sending clients to Vickie, particularly sexual assault survivors who could not be touched. Sounding these clients helped relax their nervous systems so they could work through their emotions.

Sounding a person’s body helps break up the crystallization of the recordings, dissolves the congestion and makes the body more liquid, Vickie explains. It unravels and dissolves the armor.

“Most bodies I meet are so grateful that someone just wants to let them express themselves without an agenda,” Vickie says.

Pioneer in the field

She’s a pioneer in the field, traveling throughout the world to give seminars, work-shops and trainings. Unlike a few decades ago when the body/mind/spirit connection movement seemed at odds with science, the world is now experiencing that “science is catching up to the spiritual,” Vickie says. Science is providing validity to what the spirit already knew about existing energies. Sound works on those energies. Sound creates form and changes form so that it not only affects the emotional, but the physical as well.

As a practitioner with Sound Body Productions, Vickie mainly teaches others how to use their voices to sound themselves. She offers private sessions for teaching and will sound individuals who don’t feel ready to use their own voices. She teaches people ways of learning to listen to the rhythms of different parts of their bodies to see what the body wishes to express rather than what the mind insists upon. By learning to listen, Vickie helps people access their “innate intelligence.” “I don’t teach sound. I teach how to access sound,” Vickie explains. “When I look at a human form, I see a composed piece of music. When I listen, I start playing the rhythm, a pattern of messages,” she says.

The sounds are not necessarily words or a “tune.” But, Vickie notes, the wounds of the body often feel a common ground with certain kinds of music, particularly jazz and blues. Hence, the title of her book, Tuning the Blues to Gold, which Vickie says is a compilation of her work and the sounds experienced from the bodies she has met over the years. Meant to be read aloud, it can be used with other sound work.

It is a tool to help those set-ting out on the journey of learning to listen and sound. Vickie says she grew up listening to her mother sing the “laments” of the Appalachian people — a mountain version of the blues. The blues are a commonality among all people, she says. “If you sing the blues, you lose the blues,” she says.

With new clients, Vickie often sounds them herself and teaches them to find their own hum. Even though the mind may not understand the dissonant sounds, the body will feel lighter, more aligned afterwards. As the work continues, Vickie says, dissonance always – turn to harmonies. Change begins as soon as the work begins. The body recognizes the sound and is comfortable as it is innate intelligence, some-thing it already knows and is familiar with.

As the director of the School for Sound and Sacred Art, Vickie offers classes twice a year in Zürich, Switzerland, and is planning to start a sound and nutritional training school in Port Angeles beginning in November. She also wants to start a harmonic overtone singing group based on American music traditions of blues, talk-ing blues and jazz. That would be in addition to a group she already has organized which meets on Mondays which concentrates on sound work.